JoeSimonsen wrote:Interresting debate, but where are D6,8,10,12 located in the airport?

A link to the newest satellite picture of the airport: http://map.krak.dk

They are located inbetween the 'D concourse' and the CPH GO terminal.

As I travel very frequently, I see a lot of the airport's progress and the first time I saw these gates was in June 2013. I saw your post before my flight this evening so I was prepared

I just flew in to EKCH from Manchester and parked at C39, so taxiing en-route, was able to catch a okay image of the area: an SAS A340 is on D8.

The image attached shows the aircraft taxiing on Romeo (heading north) with concourse C approaching to the left of the aircraft and CPH GO terminal on the right.

Unfortunately I didn't get the pictures I wanted to as we were supposed to park in at D1 according to the captain on the PA before landing! In that event I would have been able to provide you (Emil) with decent material, as I would have gotten a better sight of the gates.

Pardon me for the poor image quality above (night photography is not an iPhone's cup of tea!) These are the latest charts I have access to, and the area within the red boundary shows roughly where the gates are located to give you a better idea.

I believe it's those attached here. from that image it looks like there is no attachment to terminals or any new structure so it probably is a simple matter to add them in.

Yes those are the correct gates and positions. There is no new structure or terminal.
Top

Okay, it is because we can't see them on the satellite photo, and I didn't notice them either when we left Copenhagen in february or when we returned later same month. We parked a C37, but we where also sitting in the wrong side of the plane both went we left but also when we returned to Copenhagen

you're correct: D6-12 are remote stands. D8 is the only A380 capable stand in the terminal area so far, so it might be worth adding the area if it's not in your scenery already.
As mentioned in PMs to you a few times: If in doubt about issues like these, drop me a line. After 25 years in EKCH Tower, I'm not ashamed to say that I have a pretty good knowledge of the area and can get you information that is much better than snapshots from an aircraft window...

This is looking very promising!
Hoping for some new screenshots very soon!

Anything would suffice
Top

I'm sold on a purchase too! This looks amazing so far.
FS2004 thought, that's what I fly mostly, especially with big jets.
There's currently NO computer you can buy off the shelf in my country that can handle FSX with scenery like this and AI traffic. My computer is better than those in shops, and it struggles with medium airports with 100% AI in FSX.
But it drives FS2004 with maximum settings all round like a dream!
Also, look at the support from the serious enthusiasts community: 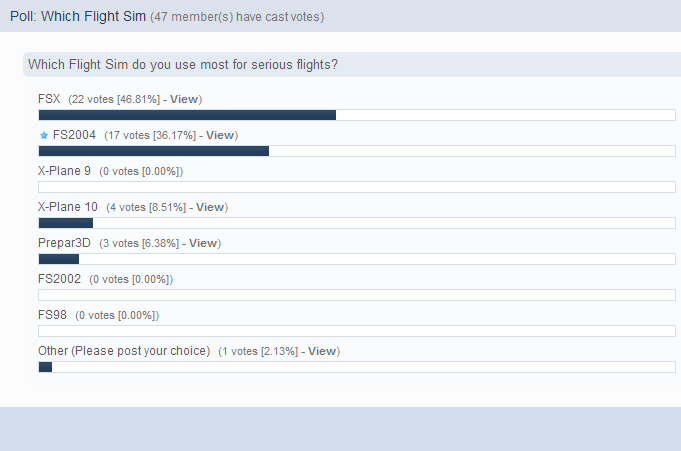 Sam Arnold wrote:I'm sold on a purchase too! This looks amazing so far.
FS2004 thought, that's what I fly mostly, especially with big jets.
There's currently NO computer you can buy off the shelf in my country that can handle FSX with scenery like this and AI traffic. My computer is better than those in shops, and it struggles with medium airports with 100% AI in FSX.
But it drives FS2004 with maximum settings all round like a dream!
Also, look at the support from the serious enthusiasts community:

Please stick to the topic. We don't want to hear you guys ramble on, debating about FSX and FS9 here. Besides this is not an objective poll and not one of stratified sampling.
Top

AeroDan, Sorry if this seemed off-topic to you, but it relates to the development of CPH.
You say it's not a correctly selected sample, however the sample for this poll is of veteran FS users, the people who have a true passion for FS. We are also made up of a lot of real-world private and commercial pilots, myself included. The sample did not include young newcomers who want a game-like exciting experience and are prepared to spend thousands of dollars on gaming PCs. I understand that a lot of customers buy FSX products, but there are still a lot of serious enthusiasts still engaging in FS2004 for genuine reasons. Please have an open mind to all Sim platforms.
Top

I'm sorry, but the above is NOT a very good indicator of anything...

I'm not really sure, what you're trying to prove by posting it - but only 47 members have cast voted in that poll! They maybe 'hardcore-simmers', but it's not really representative of a whole community, and statistically you can't really draw any conclusions with so few people...
Top
Post Reply
246 posts